Nothing will launch its debut smartphone this summer, its CEO and former OnePlus co-founder Carl Pei announced today during a live stream. It’ll be called the Phone 1, run Android, and be powered by a Qualcomm Snapdragon processor. Nothing shared a handful of details about the upcoming device while promising to reveal more over the coming months.

when it comes to software, the CEO is more forthcoming. Today, Nothing is releasing a series of images of Nothing OS, the Android skin it plans to ship on Phone 1. The images don’t reveal much about what the software might be able to do, but Pei is keen to emphasize its look, which very consciously lines up with the rest of Nothing’s branding. The interface is a sea of black, white, and red that leans heavily on the dotted font that Nothing uses for its logo.

Pei’s also very into the sound of the phone, an area he thinks is often overlooked. “Our sound design is really cool,” he says, “so definitely check that out.”

Pei positioned the Phone 1 as part of a broader ecosystem that will be open to other brands. He said his hope was to create an ecosystem that would feature Apple-like cohesion between different products and services while at the same time allowing people to use whatever devices they want. “This is the start of an open and diverse product ecosystem that gives people real choice,” he said. “We’re building the most compelling alternative to Apple.” But exactly how Nothing plans to achieve that vision Pei was specific about. 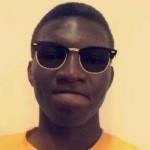 Tags: Nothing Nothing Phone 1 Phone 1